I found out of I was pregnant in January 2014. Although neither side of our family had a history of genetic issues, we did the genetic testing (Panorama blood test) early on to help to ease our minds that our little baby was healthy. Everything came back as normal and that’s also when we learned that we were having a boy!

Fast forward to my 20 week ultrasound. My husband was out of town, so I went with my mom for the anatomy scan to ensure everything was developing it should be. The ultrasound tech didn’t give any indication that anything was wrong and Luca seemed to be developing just perfectly. The doctor came in afterwards to review the results and informed me that Luca was going to have a cleft lip. I was shocked. I’m pretty sure my heart stopped beating and the world completely stopped for a quick moment. How could it be that my perfect and healthy baby was going to come into the world without a perfect face? I had no reason to believe he would be anything but perfect up until this point. (Side note: Luca IS perfect to me, just the way he is). The world could be a cruel place and I immediately felt very protective of my unborn baby and I was terrified for what this would mean for him. The tears flowed and I remember feeling so helpless. Were people going to judge my baby? Were they going to judge me? Was I to blame for this? Could I have done something differently to prevent this?  Since I had genetic testing done early on, my doctor felt that the cleft lip was most likely an isolated issue and not part of a bigger issue, but she sent me to Maternal Fetal Medicine (MFM) to be safe. I had two ultrasounds there, one by an OB/GYN and one by a cardiologist. To this day, I don’t know why cardio was involved so early only, but maybe the doctors saw some of the other anomalies that Luca had when he was born or maybe they were just suspicious early on and didn’t share this with me. (Heart issues are associated with Trisomy 13.)  Both came back looking normal and it appeared the cleft lip was just as my doctor suspected, an isolated case. They offered to do an amnio to be sure since that was only way to really get a full picture, but since everything else seemed fine I declined. I didn’t see a point of risking the health of my unborn baby or putting myself through the stress of it. I later learned, the only way I would have found out about PT13 is through an amnio.

The rest of my pregnancy was uneventful. I continued to be followed by MFM to be safe and I actually looked forward to my ultrasounds with them. The pictures were so clear since their machines are so high tech and I was anxious to see how Luca’s lip would look. It appeared the cleft was small and we were hopeful that it would be an easy fix for Luca! The doctor noticed a little extra fluid build up on Luca’s left kidney, but said that it was common with boys and it was only ever so slight above the normal range. Again, nothing to worry about they said!

We researched craniofacial surgeons and started meeting with them before Luca was born to learn about the process to repair.  Since it was impossible to tell if his palette was affected, we needed to have a plan in place in case there was an issue with that as well. We met with a doctor at Loyola, but did not feel comfortable with her. She came into the appointment completely unprepared, seemed rushed and annoyed and didn’t have the experience we were looking for – she was definitely not going to be the person to operate on our son’s face! Then we met Dr. Corcoran with Lurie Children’s Hospital in Chicago. We immediately felt comfortable with her! She came into the appointment with before and after pictures from previous surgeries, reviewed the ultrasound photo to see if she could find a picture for us to get a better idea of how Luca would look before and after and was just so cool and comfortable rather the arrogant and rushed as the doctor from Loyola. We both immediately decided that she was going to be our doctor. It was comforting to know that we had a plan in place and someone who was prepared to help with Luca’s surgery.

My due date approached quickly and we were ready. I was adamant that I didn’t want to have a C-section and my doctor recommended that I be induced at 40 weeks to make sure that Luca’s head was fit the birth canal and I could deliver with no issues. Looking back, I knew she was going on vacation the following week and I think that she just really wanted to deliver Luca herself and may have suspected that there was a little more going on with him than just a cleft lip, so I believe she used this excuse to get Luca before she left for vacation. I was induced on August 28, but Luca didn’t come until August 29. After 32 hours, he was finally here! The room felt so busy and there was so many people in there ready for him. (I just thought that was normal, until I had my second son and there was only a doctor and a nurse in the room and a much, much more relaxed setting!) Luca came out with a very small cleft and the best news ever, his palette was intact! That was one less issue we would have to tackle. However, Luca was born with several unexpected issues: he was polydactyl on both hands and feet (an extra digit), he had undescended testes and the fluid build up that was happening on his left kidney was actually Grade 2 hydronephrosis.  The Neonatalogist recommended that we have his blood drawn for genetic testing and contacted a geneticist with Lurie Children on our behalf. Somehow, we were able to get an appointment within a week to see her following Luca’s birth. Both of us were so in shock with all of these issues since we weren’t expecting them. Honestly, we didn’t really think there was anything else going on since Luca seemed healthy otherwise and we had normal results with our Panorama testing.

Luca was in the nursery or in my room for 3 days, he didn’t need to be in the NICU. He had SO many tests done and since it was a holiday weekend, the staff was spread thin. However, one by one, he was cleared of any big issues! Because of the cleft, there were some feeding concerns, so I started pumping exclusively to ensure he was getting the nutrition he needed. The nurses discovered if you pinched his lip together to seal the gap while he was bottle fed, it was easier for him. We all learned to do this and Luca seemed to be doing well. When we finally got the clearance to go home, we were more than ready. The hospital was not relaxing at all. We had appointments that same week with the Geneticist and our pediatrician, all seemed to be okay. Little did we know, our world would be forever changed later that week.

Results from the blood test came in, Luca had Partial Trisomy 13. Our pediatrician actually gave us this news and had assumed we had already spoke to genetics. I will never forget his words; “The results show Partial Trisomy 13, we are very lucky it’s only partial! This is good news!” Not knowing anything about genetic abnormalities, I had NO idea what this meant, but I knew it couldn’t really be good. On one hand, I was relieved they were able to identify what caused these abnormalities with Luca, but on the other, a diagnosed genetic disorder sounded very scary.   I went home, opened a bottle of wine and started doing research online. BIG MISTAKE! In the meantime, my pediatrician had called our geneticist, Dr. Burton, to tell her her staff what happened and that she needed to call me right away to further explain his diagnosis. It was a Friday of course, but the Genetic Counselor for Dr.Burton called and assured me that things I was reading online were not was Luca has and I would most likely not find much info on Partial Trisomy 13 since it’s so rare. She was right, I spent the whole weekend trying to find more information, but it was all for full Trisomy 13, which is usually fatal. That weekend was by far the absolute worst weekend of my entire life. I cried the entire weekend convinced my little Luca was going to die and continued to get sucked further and further into the stories I was reading online.

That weekend changed me forever, in same ways, not so good. I didn’t realize at the time, actually not until long after his birth,  but I emotionally detached from everything in order to protect myself. I was Luca’s mom and I loved him, but the bond I had with him felt distant. I wasn’t sure if that was normal for new mothers to feel that way since there were so many hormonal changes happening with my body.  I didn’t know what to do for or what to expect, everything was such a mystery and my sweet little bundle of of joy was never going to be a “normal” child. I grieved for myself, for Luca and for the life I thought I was going to have with him.  It wasn’t until after I fully understood his diagnosis a little more and finally became convinced he would live, that I allowed myself to really fall in love my little boy. We were reassured by many doctors that Luca didn’t have anything going on health wise that could lead to an early death. That was the best news.

So here we are, three years later! Luca is doing AMAZING and he’s changed me in ways I can never describe. He is truly a blessing and a cherish every small victory that boy achieves!

View all posts by Marlana M 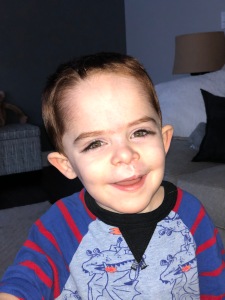