Living with and conquering Partial Trisomy 13

Luca had surgery to repair his lip in early December 2014 when he was just 12 weeks old. We were terrified of putting our new baby under anesthesia, but it had to be done. Deformities are the first things are typically judged by the general public. We decided early on that we didn’t want Luca to be judged by his appearance by those that didn’t know his for the sweet and loving boy that he is.

After several visits with Dr Julia Corcoran at Lurie Children’s in Chicago, the big day finally arrived! It was exciting and scary at all once. There was apparently nothing to be nervous about though, Luca pulled through he surgery with flying colors and his doctor was happy with her work!

When we went back to the recovery room, we were so surprised at how different he looked! For 12 weeks, we had started as the same little baby face and didn’t realize how much it would change with his lip repaired. We were sent home the same day since Luca was able to take a bottle with no issues, so there were no concerns about the function of the repair.

Photos below from left to right: Before surgery, getting ready for surgery, the day after and a close of up the repair. 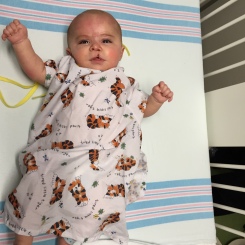 At home, we was pretty out of it. We gave him baby Tylenol as instructed to prevent any pain administered and set alarms so we wouldn’t have any unnecessary time gaps between doses. Luca was a little cranky, but overall, he did great! A few days after the surgery, the glue on his lip began to crust over and fill with nasal leakage, so we couldn’t really see the repair any longer. The orange anchor in his nose in the photo above is an anchor to hold the stitches used to seal his lip in place.

At 6 months old, Luca’s scar was looking great! It was really red still and we had to massage it twice a day for 15-20 minutes to keep the scar tissue soft. Luckily, Luca slept through it, so we got lucky! 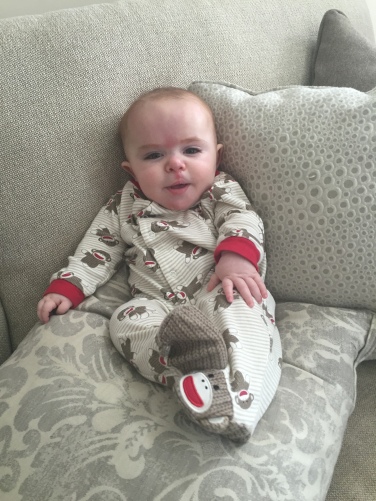 We continued to follow up with Dr Corcoran to make sure Luca’s scar was healing well. The scar got less red, but did continue to be raised and thick. One year later, here he is!

Dr Corcoran recommended steroid injections directly into the scan to try to soften it. It worked really well at first, but the scar slowly hardened again over time and it was still pretty thick. She gave us the option to try another round or injections or to just go in and cut out the scar tissue and reseal it again. We opted for another surgery since the odds were much better that Luca’s scar would improve even more. Since either option required more anesthesia, we figured this was the best route for Luca to have any chance of having a smaller scar. It was not a selfish decision, but instead an attempt to protect Luca from any potential judgement from peers and other adults as he aged. His scar doesn’t define him, but with so many issues already, we didn’t want another reason to stare at him. Since he doesn’t talk, he wouldn’t be able to explain to anyone how he got his special scar.

We went back for another surgery just before Thanksgiving in 2016. Luca was just over two and was a champ! Here he is on the way home and at his check up a week later. The scar already looks so much better. We also learned that we made the best decision possible for Luca since the scar tissue was much deeper than the doctor expected. It went all the way down in to the lip muscle and could have caused potential issues later. 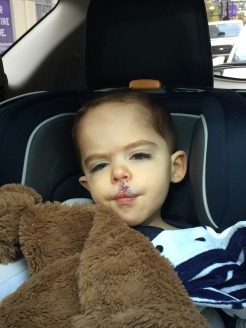 On the way home from surgery

At his check up a week later. 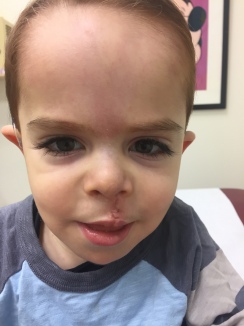 Close up at his check up.

This time around, there is no way that we would have been able to do scar massages on Luca! Instead, we are using Kelo-cote gel to help keep the scar soft. We put it on just before bed.

Here he is today, just 11 months after his last surgery! I don’t even see his scar anymore, but I look at him every day and to me, it’s just a part of Luca’s face. It does look so much better though and in certain lighting, you it’s hardly noticeable. Over time, it will continue to shrink as his face grows and will hopefully just be a thin line. His lip isn’t 100% even on both sides, but that’s who is he and we aren’t planning any revisions.